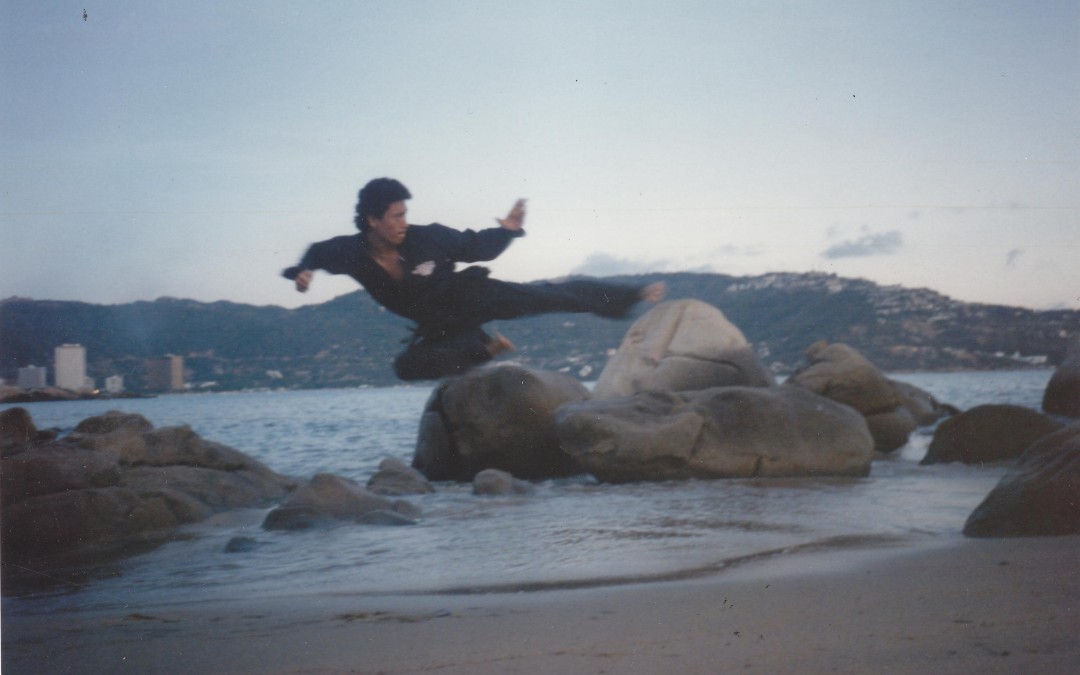 Approximately 1300 years ago (during the 6th Century A.D.), the Korean peninsula was divided into three kingdoms: Silla, Koguryo, and Baek Je. Silla, being the smallest of these kingdoms, was constantly under invasion and harassment by its two more powerful northern and western neighbors. During the reign of Chin Heung, twenty-fourth King of the Silla, the young aristocrats and warrior class formed an elite officer corps called Hwa Rang-Do. This warrior corps – in addition to the ordinary training in spear, bow, sword and hook – also trained themselves by practicing mental and physical discipline, and various forms of hand and foot fighting. To prepare their bodies for the task of defending their homeland, they climbed rugged mountains and swam turbulent rivers in the coldest of months.

The Hwa Rang-Do became known in the peninsula for their courage and skill in battle, gaining respect from even their most bitter foes. Many of these brave young warriors died on the battle field – as young as fourteen years old. However, their accomplishments inspired the people of the Silla to rise and unite. From the victories of the Silla, the Korean peninsula became unified for the first time in its history.

The Silla and Koryo dynasties marked a flowering of the martial arts in Korea. Soon after, however, the dynasties acquired an anti-military attitude. Though this began a period of civil enlightenment, anything dealing with the military was disgraced. By the end of the Yi dynasty the martial arts appeared to have ceased existing. The final blow came with the Japanese occupation (1909-1945), when it was forbidden to practice any of the martial arts. Taekwondo was secretly practiced by some dedicated followers and passed on to a handful of old students. Patrons of the art, such as Song Duk Ki and Han Il Dong, managed to keep the art alive.

With the liberation of Korea in 1945, the new Republic of Korea Armed Forces was organized on January 15, 1946. A Young Second Lieutenant, Choi Hong Hi, recently released from Japanese prison camp, began teaching his martial art to his soldiers. This is what resulted in what is today known throughout the world as Taekwondo. Modern Taekwondo differs greatly from other martial arts. In fact, no other martial art is so advanced with regard to the sophistication and effectiveness of its technique or the over-all physical fitness it imparts to its practitioners.

It is quite easy and convenient to find Chelsea football club tickets some time before the big game. Not so, the few weeks before the game is slated to take place, the ticket prices start to shoot up sharply! All you have to do is sit down and check out several internet sites that offer the entry voucher for England international matches. Ordering the Authenitc Chuck Bednarik jersey thing through internet sites will give an assurance to Womens Donnie Jones Authenitc Womens Darren Sproles jersey jersey the general seating area or place of your choice in the premiership season. Once you have availed the entry coupons Elite Byron Maxwell jersey of your much coveted event, you Elite Youth Brandon Graham jersey can check out the Elite Brad Smith jersey ford field seating chart where you Brandon Graham jersey can see information about Elite Womens Byron Maxwell jersey the thing.

Without a doubt, you can also find the tickets of your favourite event at eBay, where Authenitc Mens Brad Smith jersey commodities are always on brisk sale prices and are typically relatively low. Aside from the eBay Elite Womens Brad Smith jersey site, various ticketing websites also offer Champion League Tickets for sale for those who cannot afford much on the prices.

However when buying the entry coupons, you should consider the prices especially if the event is the one you are much sought after. How much are the permits worth? The price of tickets for English Authenitc Chuck Bednarik jersey football matches varies depending on the history and appeal of the tie. If it is a match that many people want to see, the prices will be exorbitant. Again, the variation takes place depending on the Elite Black Byron Maxwell Mens Chuck Bednarik jersey jersey number of seats. Kids Darren Sproles jersey In general, the Authenitc Kids Brandon Graham jersey tickets closer to the field are relatively expensive.

The cost of the permits for the UK football event does not show or reflect on the ticket order. However, the total price Elite Black Brad Smith jersey of the order has an incurred service charge. The game wins for an event are never Byron Maxwell jersey that easy to come and neither are the entry documents as well. Some enthusiasts even beg, borrow and steal FA Cup, Europa League tickets etc. However, the best UK ticketing site to buy the thing is Football Ticket Hub. This site will surely fulfil your dream of having the thing with lesser work and effort in finding them.

Tickets for football international events are already on sale on the aforesaid website, so hurry up and maximise the opportunity now to avoid the eleventh hour disappointment. Your email address will not be published. Fields marked with asteric are required.